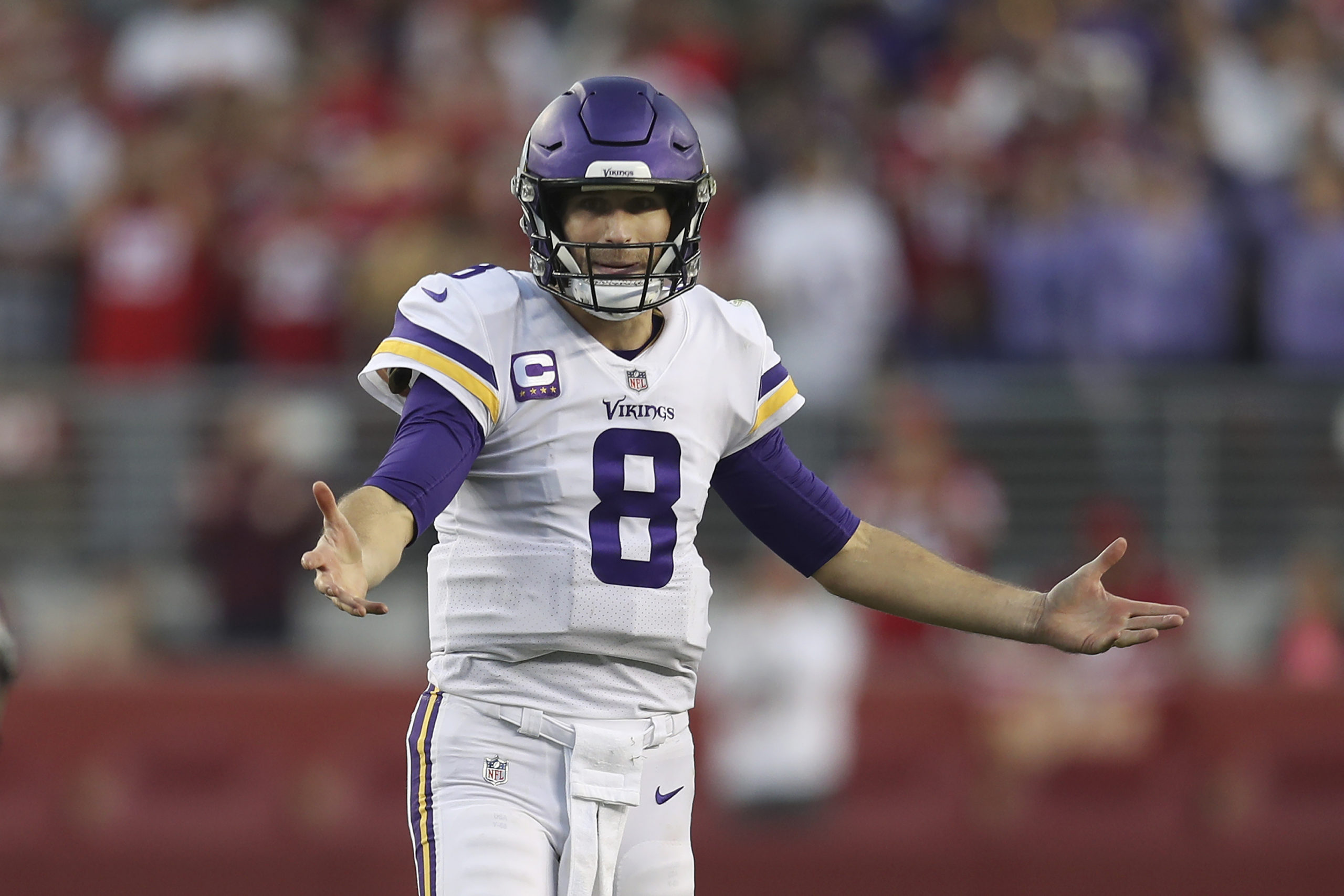 The Vikings’ victories over the Chargers and Packers sent them into Sunday’s game against the San Francisco 49ers with an opportunity to get over .500 for the first time this season and earn a win that would go a long way toward securing a playoff berth against a conference foe.

As hard as it was to believe, Mike Zimmer’s team seemed to be embracing the fact that its success would be based on offensive production and it didn’t hurt that Kirk Cousins was playing with the type of confidence that too often had been fleeting in previous seasons. Maybe the Vikings had finally found a formula that could be sustained.

In a game that couldn’t have been scripted better for the Vikings to prove that they really were different, Cousins and Co., reminded us why significant changes will need to be made for this franchise to have a chance to become legitimate contenders in the NFC.

The 34-26 loss in Santa Clara, Calif., featured a Cousins interception that the 49ers turned into a touchdown and a fumble by Dalvin Cook that enabled San Francisco to add a field goal. Both of those came in a disastrous third quarter in which the 49ers scored 20 points. Minnesota’s defense — playing without any of its starting linemen — gave up 208 rushing yards and three touchdowns on the ground.

The Vikings still had their chances in the second half to prove that they were a different team than the one that had made losing close games an early-season habit. Trailing by eight points on their opening drive of the fourth quarter, the Vikings had moved from their own 25-yard line to the Niners’ 3 and faced a fourth-and-goal after Cousins’ pass for Tyler Conklin fell incomplete in the end zone.

This was the exact type of play on which Cousins could continue to show everyone that he was a different quarterback in the clutch. He had led three game-winning drives this season, so it wasn’t too much to expect he would deliver in this situation.

There was so much confusion at the line of scrimmage that as Cousins tried to direct traffic he lined up to take the snap under right guard Oli Udoh. Running back Alexander Mattison tried to move Cousins under center before the quarterback finally used the Vikings’ second timeout of the half.

Kirk Cousins lined up under the right guard 😂 pic.twitter.com/9Z24J2tyq5

Despite those issues, Cousins still had a down to make sure the Vikings exited the field either tied (with a two-point conversion) or down only a couple of points. He dropped back to pass and, sensing the approaching pressure, sailed a ball over Justin Jefferson’s head in the back of the end zone. Get that anywhere in Jefferson’s vicinity and he’s going to catch it, but he would have needed a sudden growth spurt to get that ball.

That miss was huge because the 49ers specialize in eating clock — they won the time of possession battle 37:07 to 22:53 — and put together four first downs on the ensuing drive before finally stalling at the Minnesota 24. All San Francisco needed was a 42-yard field goal from veteran Robbie Gould with just under 2 minutes left and it would be up by two scores.

Gould’s miss to the right gave the Cardiac Vikings and their explosive offense an enormous break, even if Cook had been lost to a reported shoulder dislocation on the play during which he fumbled. Cousins, working from the shotgun and mostly in no huddle, completed a 5-yard pass to K.J. Osborn, then a 23-yarder to Jefferson. That was followed by an incompletion, a 2-yard pass to Alexander Mattison, an incompletion to Osborn and finally an incompletion on a short pass to Jefferson.

Cousins, who had thrown only two interceptions in 374 pass attempts entering Sunday, had his first pass of the third quarter picked off by 49ers linebacker Azeez Al-Shaair. That set up a 2-yard touchdown that put the 49ers up by 14 points and gave them two touchdowns on their opening two drives of the half. It also appeared to play havoc with Cousins’ confidence.

After completing 12-of-17 passes for 147 yards with two touchdowns during the first half, Cousins went 8-for-15 for 91 yards with the pick in the second half. Cousins had much of his success in the opening two quarters finding Adam Thielen because Jefferson was being blanketed by the San Francisco defense. Thielen caught all five of the passes on which he was targeted for 62 yards and two scores in the first half. Jefferson had two catches on five targets for 45 yards.

But in the second half, Thielen was targeted only twice and had no receptions and Jefferson caught two passes for 38 yards on four targets. Considering the high-flying attack the Vikings had put together in the previous two weeks, there was no way that this was the plan and yet here we were.

Cousins finished with seven off-target passes, two of them coming on the aforementioned fourth downs, for the highest off-target rate he had in a game this season, according to ESPN’s Stats and Information.

The loss dropped the Vikings a game behind the 49ers (6-5) in the NFC playoff race and put them in the seventh and final postseason spot ahead of fellow 5-6 teams Atlanta and New Orleans. With games remaining against Detroit (0-10-1), Pittsburgh (5-5-1), Chicago (4-7, the Vikings play the Bears twice), the Rams (7-4) and Green Bay (9-3), there remains a real chance the Vikings can get into the playoffs.

But there’s a difference between being a playoff team in what is now a diluted postseason tournament and actually being a contender. The Vikings had a chance to prove they were the latter on Sunday. They came up woefully short.